13 of the Best Places to Kayak in Michigan – With Pics!

When it comes to kayaking, Michigan certainly doesn’t fall short on lakes and rivers to choose from. Although it’s surrounded by four of the Great Lakes, some of the best places to kayak in Michigan are actually its rivers.

In case you’re having trouble choosing where to head off to for your next Michigan kayaking trip, we’ve rounded up some of the best destinations the state has to offer. From fast rivers, to calm lakes and serene shorelines, you’re sure to find the ideal spot to paddle.

The great thing about kayaking in Michigan is that there is an abundance of water. From the upper peninsula to the southeast, Michigan is teeming with stunning lakes and rivers. So it really doesn’t matter what part of the state you are in, because you are never far from a spot to put in and spend the day paddling.

Whether you are planning for your next kayaking adventure, or you reside in the beautiful state, keep reading to find out what beautiful destinations await you. So without further ado, here are 13 of Michigan’s finest places to kayak.

Best Places to Kayak in Michigan 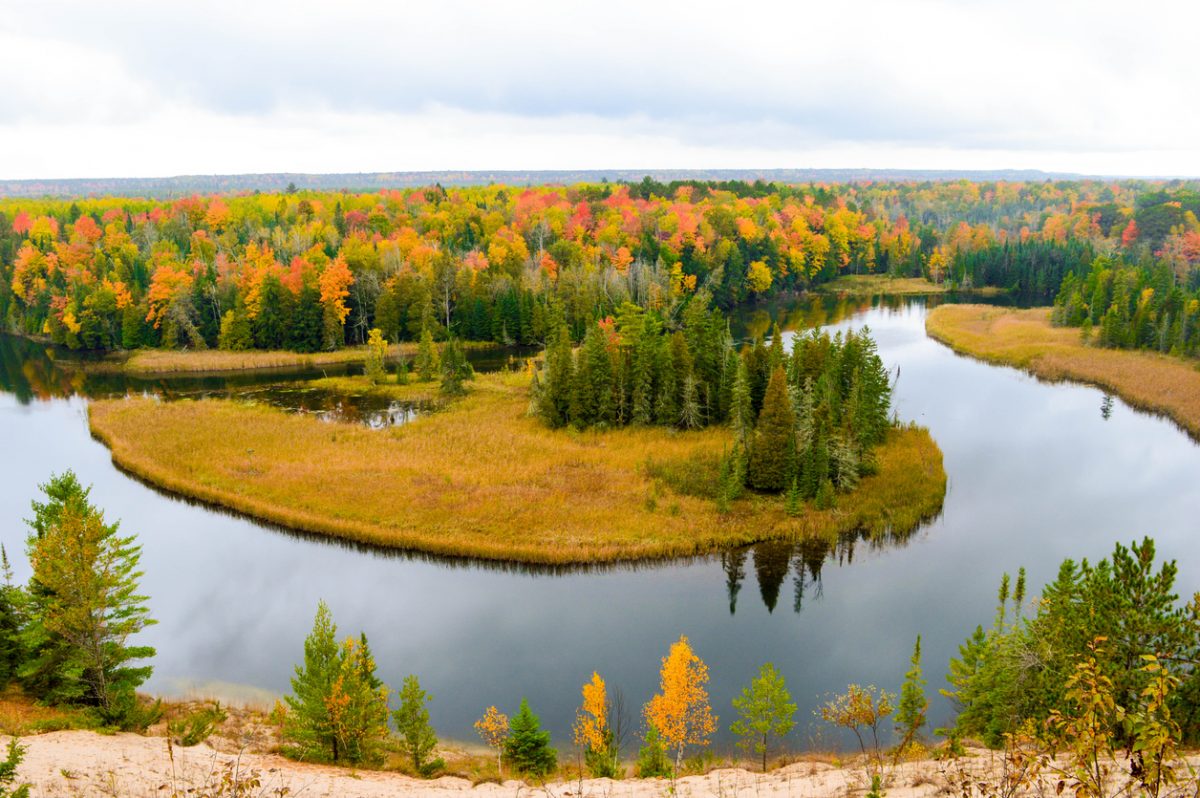 The Au Sable River is a beautiful river running through Michigan’s northern lower peninsula. The river begins north of Grayling, MI and flows for over 100 miles before emptying into Lake Huron at the small community of Au Sable.

The river is mainly known for being one of the best places in the country for trout fishing. But even if kayak fishing isn’t your cup of tea, it is still a beautiful river to paddle, and features a range of wildlife.

The Au Sable is great for either day trips or overnight trips, as there are many campsites along the shores. You can even paddle the entire river in a multi-day trip if you would like. However there are dams along the way, for which you would need to get out and carry your kayak to get around.

The river is mostly calm, and ponds created by the dams can feel more like kayaking on a lake than a river. But there are some areas with rapids up to class II. 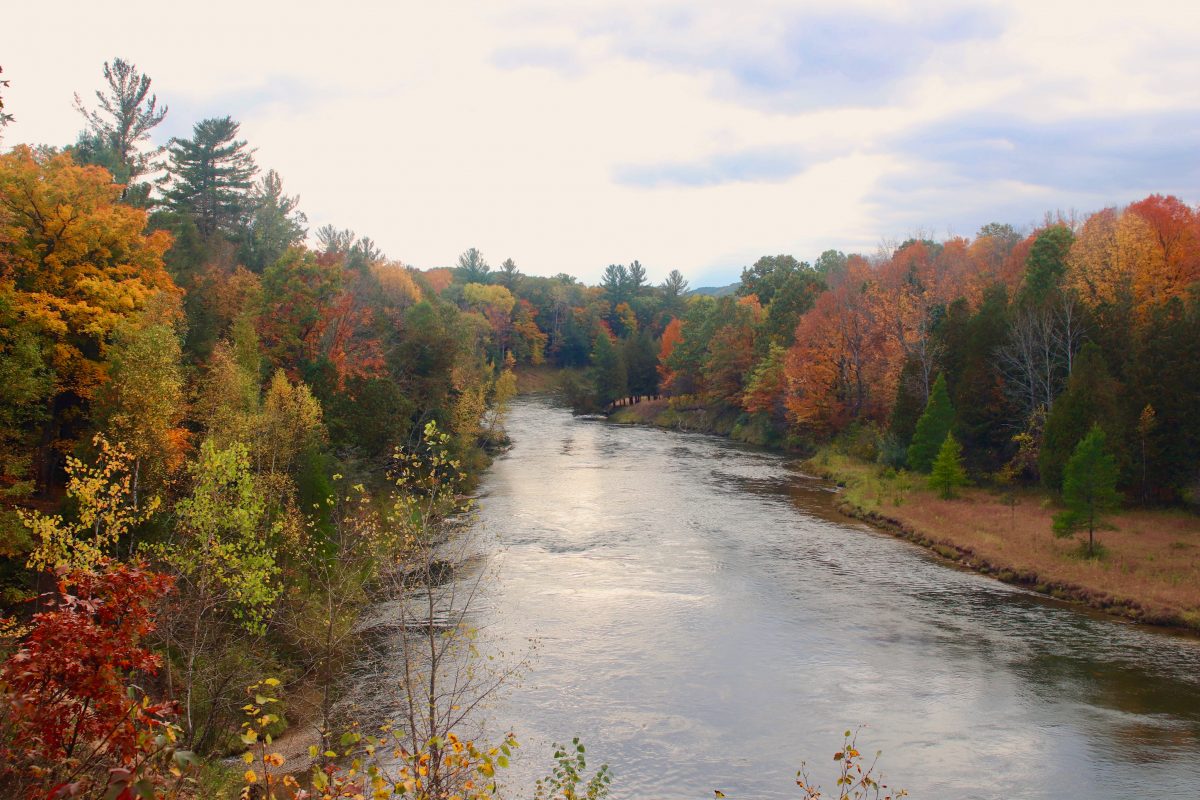 The Manistee River also has its source in the northern lower peninsula, near the Mancelona Township. It runs parallel with the Au Sable river for 12 miles, before turning southwest and flowing into Lake Michigan.

Like the Au Sable, the Manistee River has no shortages on beautiful scenery, wildlife, or campgrounds. This river is perfect for just a few hours, or multi-day trips. But for long floats, keep in mind you may encounter some difficult dam crossings, depending on which leg of the river you paddle.

The Manistee River is mostly calm, with moderate currents up to class II. 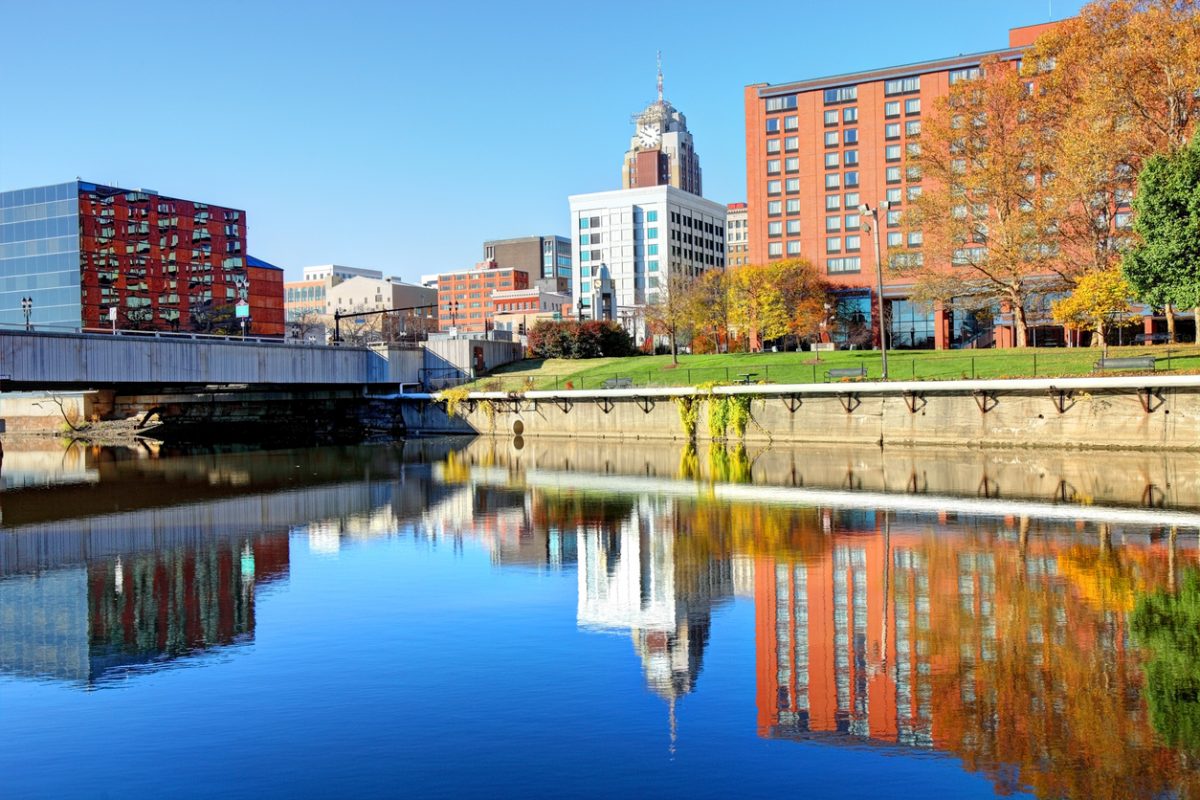 In the southeast region of Michigan, near Jackson, are the headwaters of the Grand River. Running north and then west for around 260 miles before flowing into Lake Michigan, the Grand River is the longest river in the state.

Being such a long river, there are many sections that are available to be paddled. However it is not recommended to paddle the section running through Grand Rapids, due to low-head dams which can be dangerous. There is also a lack of scenery in this stretch, and the other sections of the river are much more scenic.

With so many sections of the river to choose from, the Grand River is one of the best places to kayak in Michigan with a wide variety of scenery. Much of the river is scenic, with little to no civilization, and nothing but pristine nature. Other sections of the river go through towns, such as Lansing, and offer views of beautiful homes and buildings. The highest level of rapids on the river are class II. 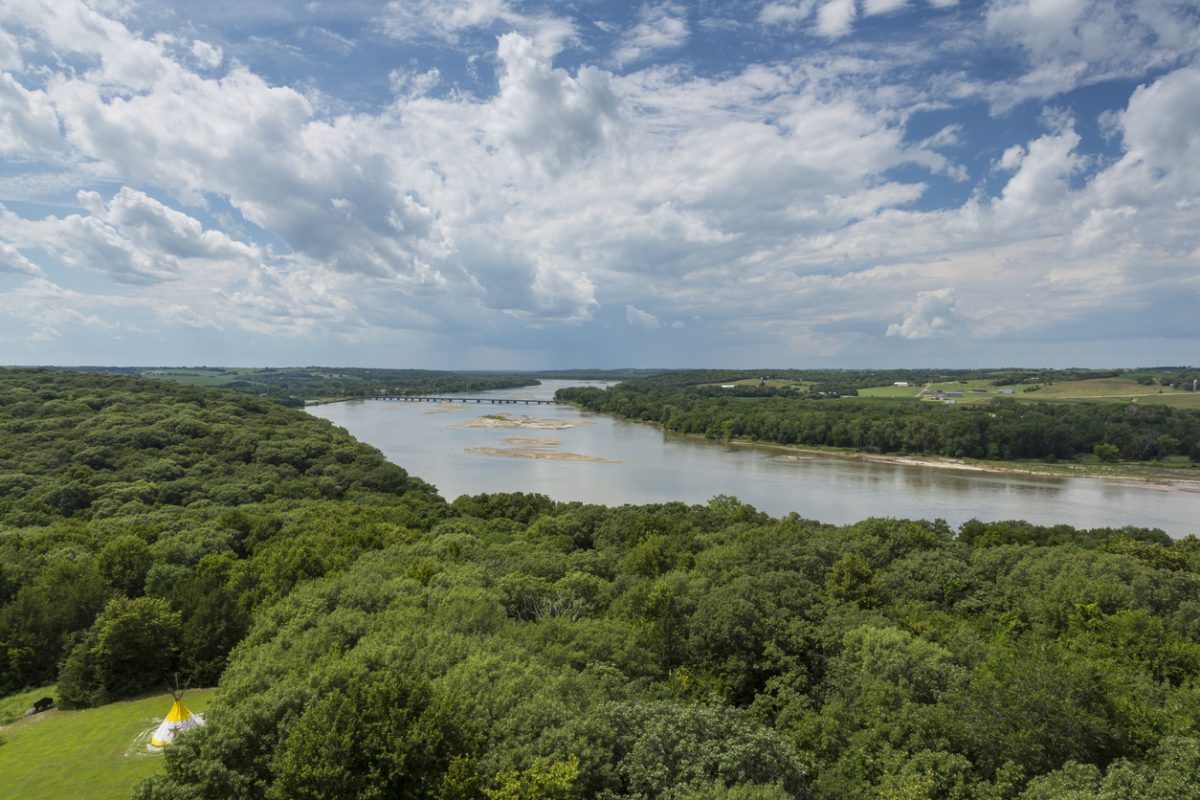 The Platte River originates at Long Lake in Michigan’s northern lower peninsula. It is a short river, just under 30 miles, and empties into Lake Michigan at the Sleeping Bear Dunes National Lakeshore.

The lower section on the other hand, is perfect for all skill levels. The current is much more gentle, and the turns are a lot more gradual. It is also home to Michigan’s Fish Weir, a contraption used during Salmon migration that is in operation between August and October. It is a cool sight to see, but keep in mind that if you visit during these months you will have to get out and carry your kayak around. 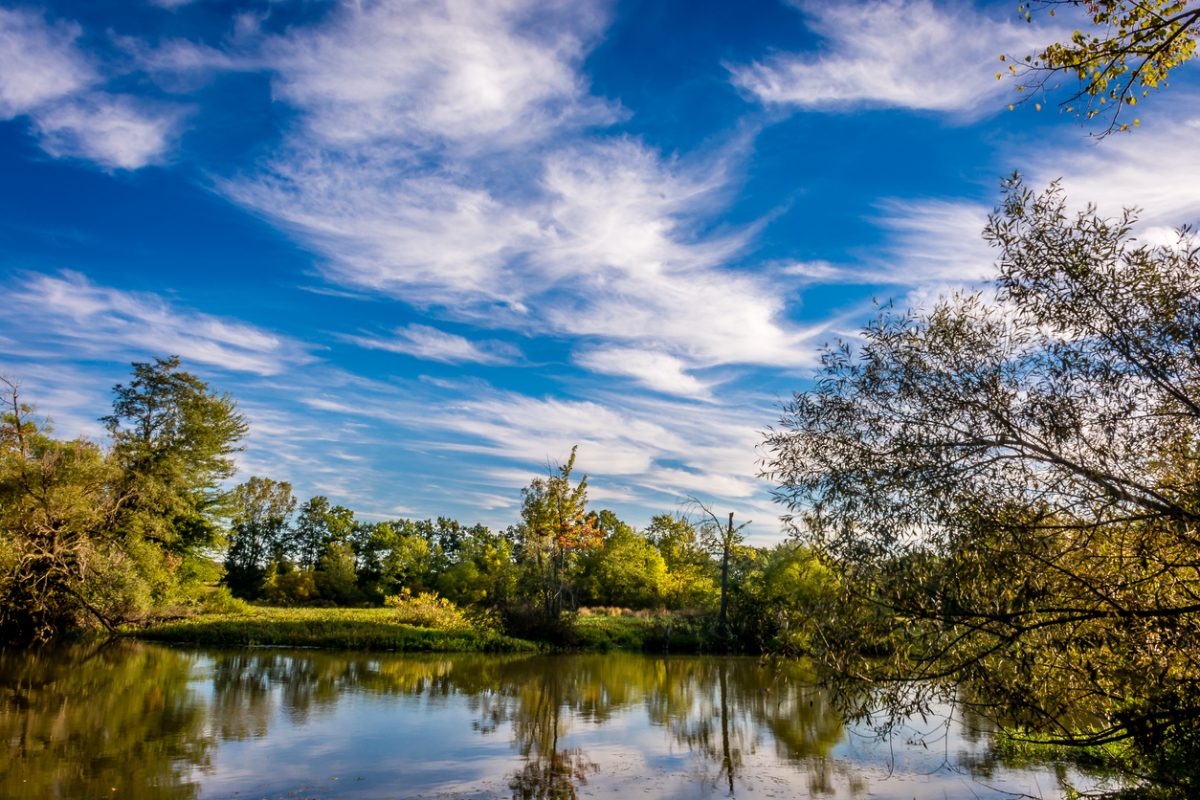 The source of the Huron River is at Big Lake, northwest of Pontiac in southeast Michigan. It eventually flows into Lake Erie, just south of the Detroit River. The river itself is about 130 miles, but the designated river trail is 104 miles long.

The Huron River is a great place to kayak no matter what you are looking for. If you want a more relaxing trip, the section of the river near the mouth is very calm. But if you want a little more excitement there are small rapids, up to class II, further upstream.

You can do day trips or multi-day trips on the Huron River, and have plenty of locations to choose from with 36 access points and four campgrounds along the way. 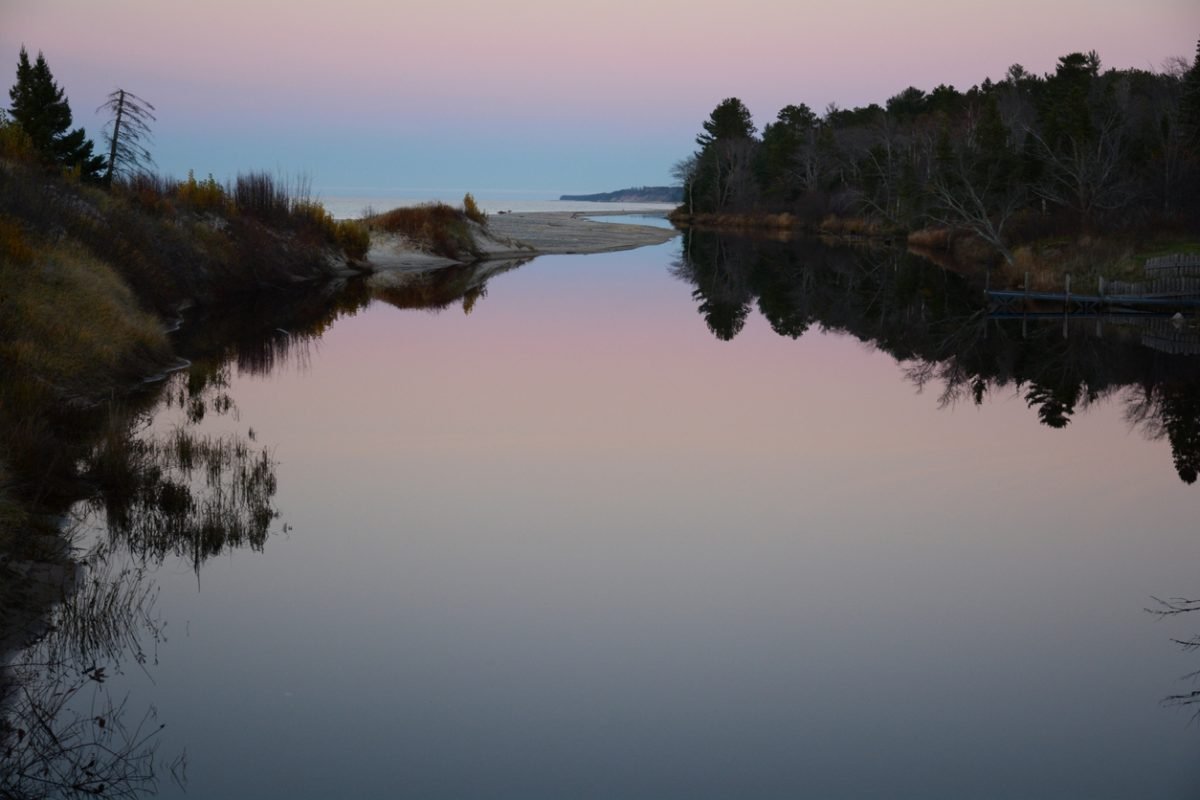 The Two Hearted River is a short, but beautiful river in Michigan’s upper peninsula. The river flows for a little less than 30 miles before flowing into Lake Superior. There is lots of wildlife, as well as beautiful scenery and sandy beaches along the way.

There are campgrounds along the river if you are looking to do a multi-day trip. The Two Hearted River is also great for beginners, with only some small rapids up to class II. 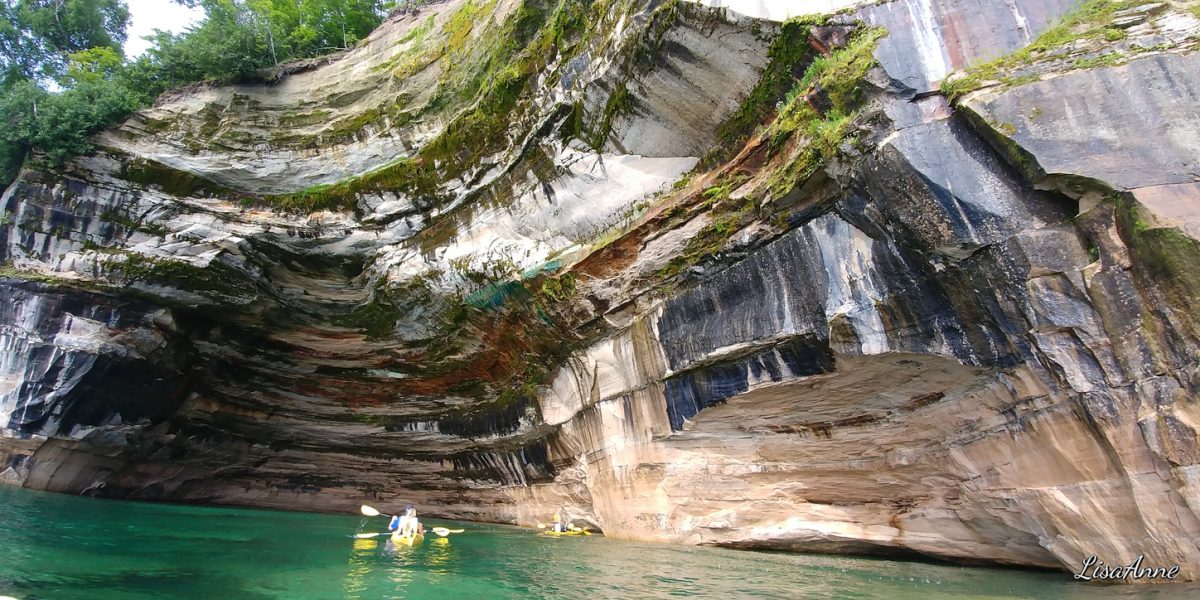 The Pictured Rocks National Lakeshore is a breathtaking kayak destination along Lake Superior in Michigan’s upper peninsula. The national lakeshore runs for 42 miles, with many beautiful sights to see along the way.

The Pictured Rocks make up a 15 mile stretch of the lakeshore. They are composed of multi-color streaked cliffs that tower between 50 and 200 feet above the lake. Aside from the Pictured Rocks, the lakeshore has beaches, sand dunes, waterfalls, and lighthouses. There are also campgrounds along the shore if you are looking to do a multi-day trip.

The Pictured Rocks National Lakeshore is easily one of the best places to kayak in Michigan. However conditions can can change rapidly on Lake Superior, so make sure you do your research and are well-prepared. 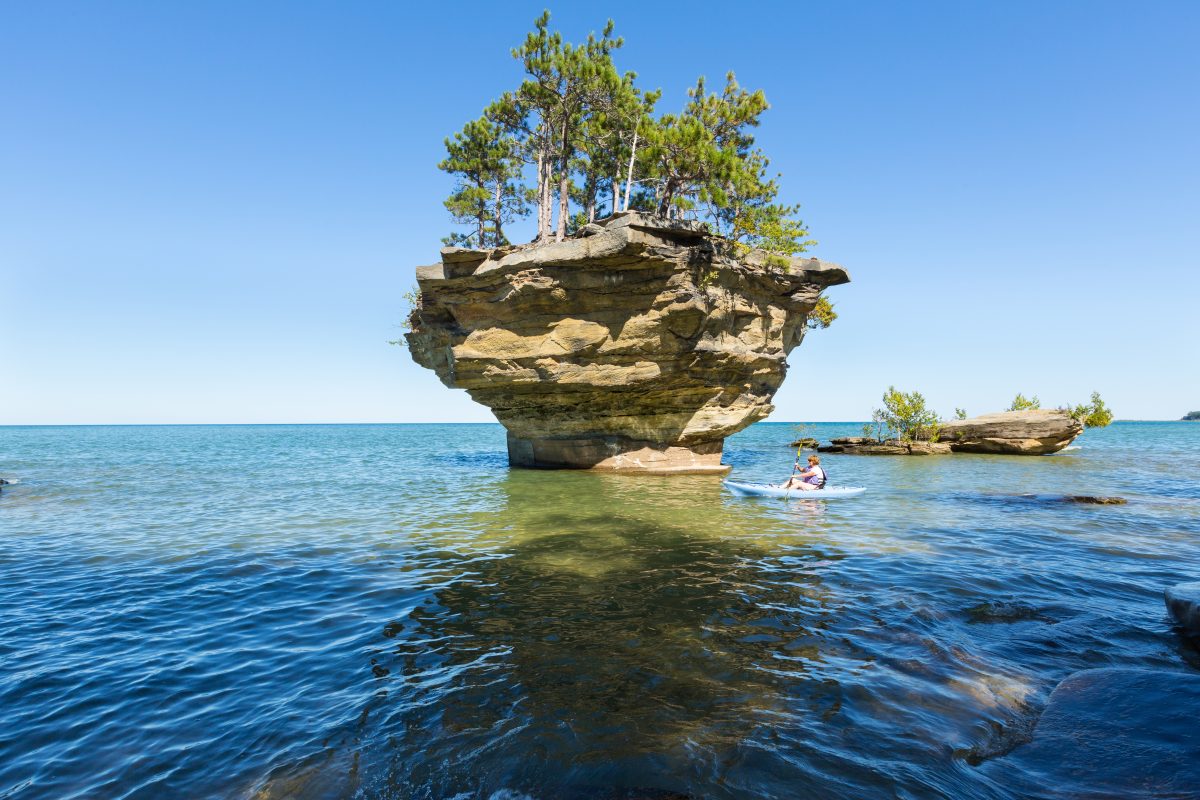 Turnip Rock is a unique landmark and kayaking destination located in central Michigan on Lake Huron. If you didn’t already guess it, the formation is a small island that gets its name because it is shaped like a turnip growing up out of the water.

Turnip Rock is only accessible by water, and is about 3.5 miles each way. It is better for the more experienced kayakers since it is a bit of a trek. Once there, the water is shallow enough to get out and explore, but be careful as the rocks are slippery. Also keep in mind that the shore is private land, so keep your exploring in the lake. 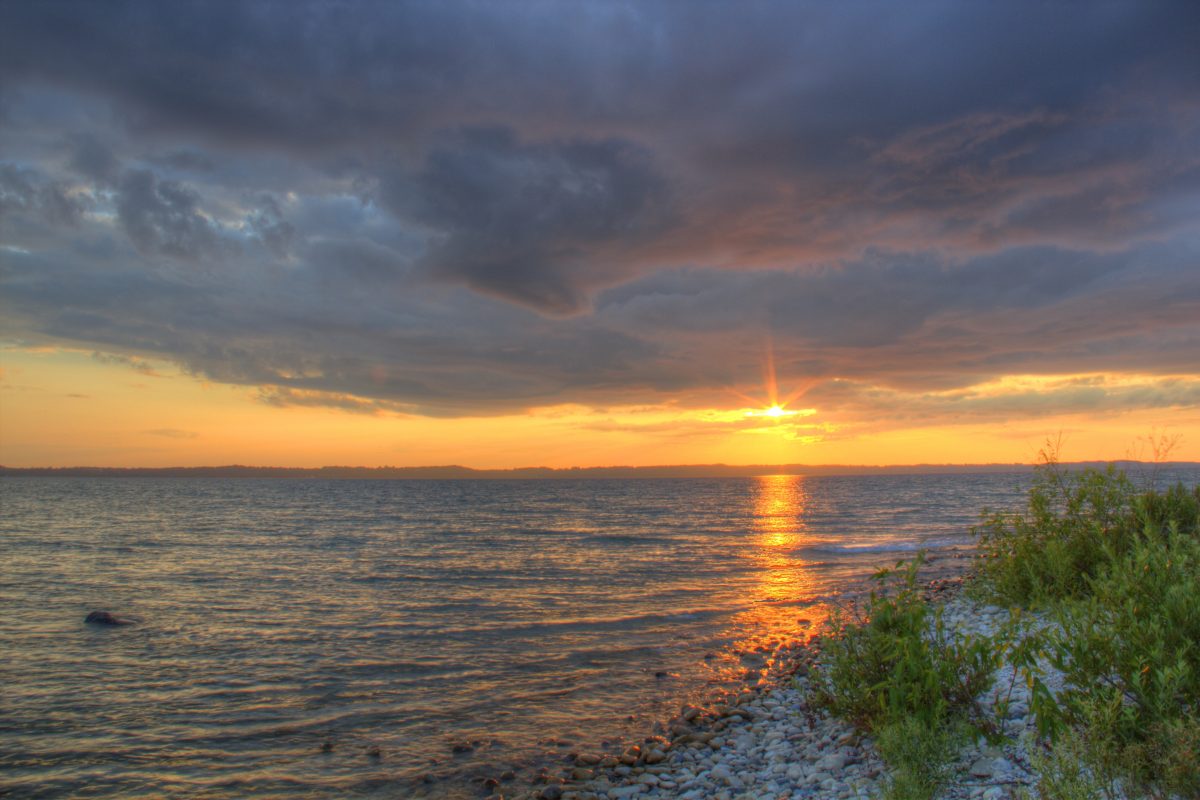 Elk Rapids is a small community in Michigan’s Northern Lower Peninsula. The town is surrounded by water, with the Grand Traverse Bay to the west, and Elk Lake to the east. With water all around, there are plenty of places to kayak near Elk Rapids.

One option is to kayak in Lake Michigan’s East Wing Grand Traverse Bay. If you make it a multi-day trip, you can camp at Barnes Park Campground and eventually make it up into Lake Michigan. 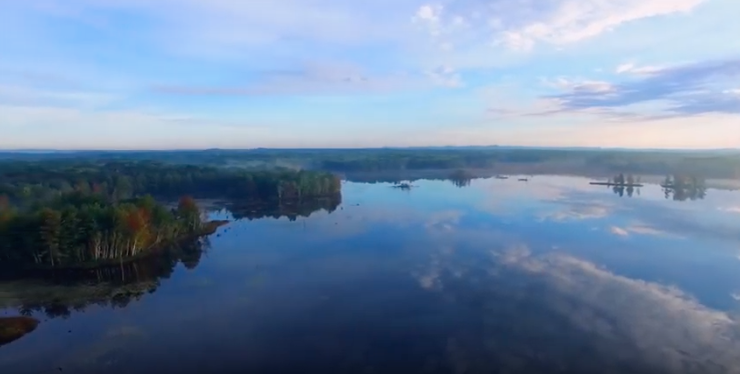 Lake Dubonnet State Forest Campground is the perfect place to spend the night before launching into the lake for a day of kayaking. The lake has very few houses, so it is a very serene destination with lots of wildlife. There are also tons of nooks and crannies to explore along the lake’s shore.

Bonus: Lake Dubonnet’s calm waters and abundance of fish make it the perfect places to whip out your stand up fishing kayak! 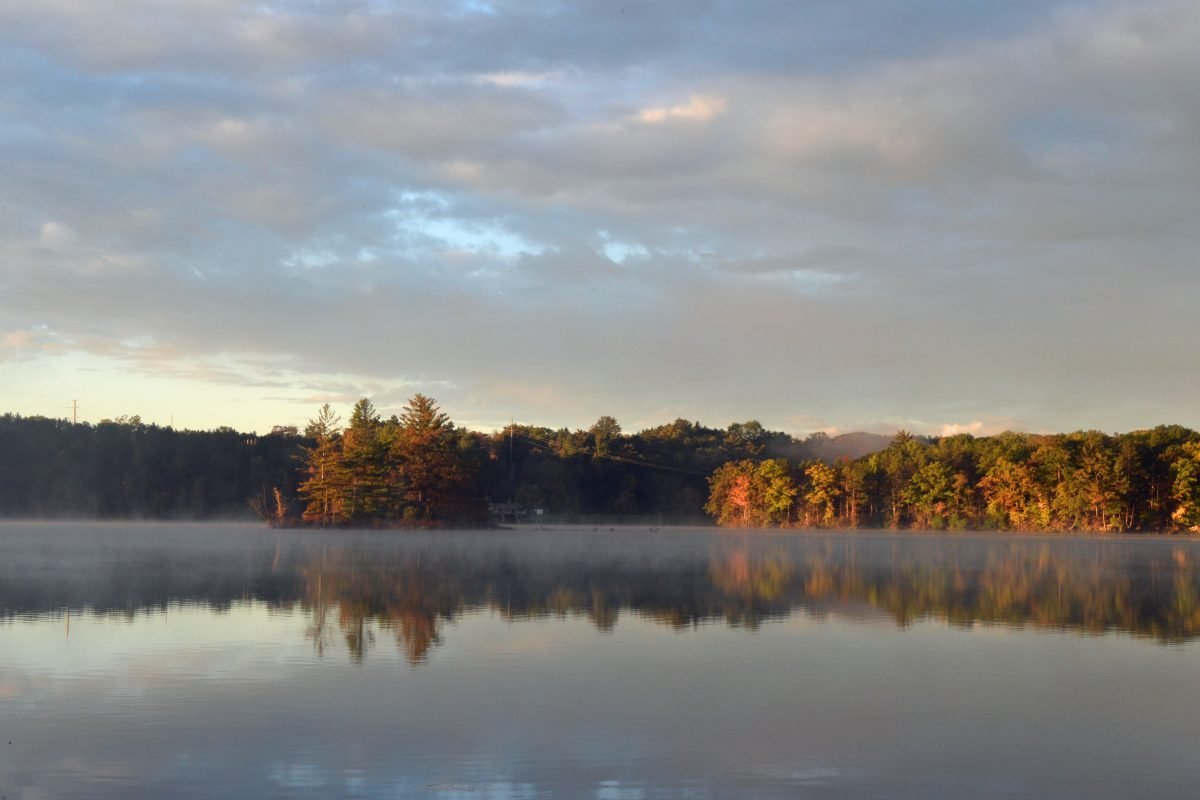 The backwaters created by Tippy Dam, also known as Tippy Dam Pond, are another great place to fish from your kayak or canoe. The backwaters are 5 miles long, and about 1600 acres, so there is plenty of space for exploring.

There aren’t any houses along the shore, so you will find yourself surrounded by nature and wildlife. However there are several campgrounds, so you can easily spend a few days exploring the shores. 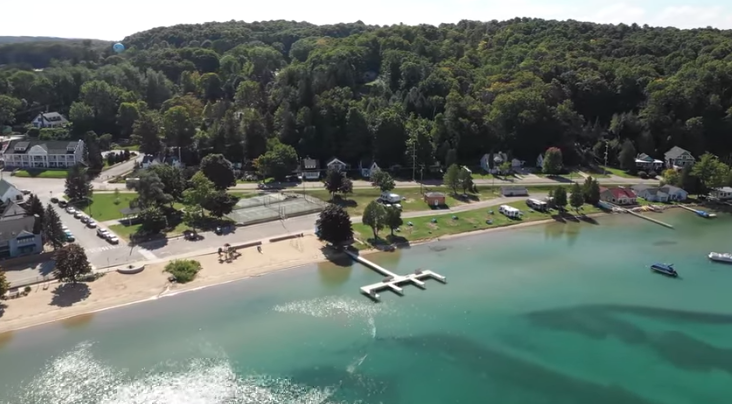 Picturesque Crystal Lake is one of the best places to kayak in Michigan with plenty of resorts and other recreation nearby. The lake gets its name from its beautiful crystal clear waters. The sandy beaches also make it a popular destination for vacations.

The only downside is that there aren’t any campgrounds on the beaches, so it’s not the best places for a multi-day trip. It is also not the best place if you are looking to see a lot of wildlife, as there are lots of homes along the shores. 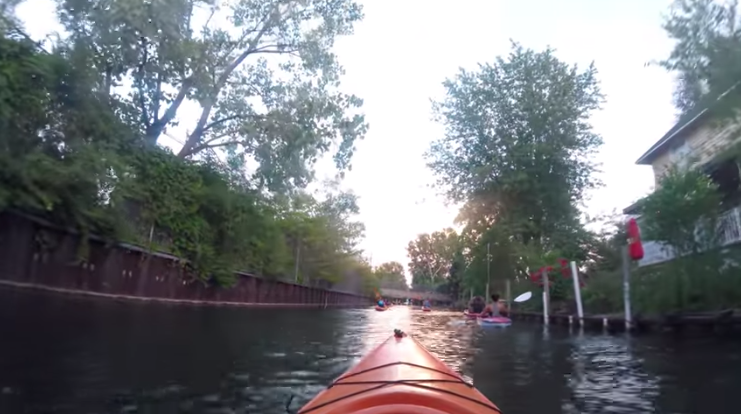 The canals running through the neighborhoods in Detroit’s east side are one of the most unique places to kayak in Michigan. The canals are located off of the Detroit River where it meets lake St. Clair. The best place to put in is at Maheras-Gentry Park.

What makes kayaking the canals of Detroit so unique is the diversity of scenery. Exploring the entire canal system takes around 3 hours, and there is a lot to see along the way. You will have to kayak along the Detroit River for a bit to reach the canals, but once inside you will explore neighborhoods ranging from completely abandoned houses to beautiful mansions.

Michigan no doubt has an abundance of beautiful kayaking destinations to offer. There are options for all skill levels, and plenty of types of scenery to choose from. If you’ve been to any of these places or know of others you think should be added to the list, let us know in the comments!